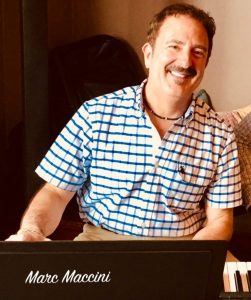 Marc was born and raised in Medford Massachusetts, a true Bostonian, ( Mahc 😀).  He performs his original music, as well as songs of the Great American Song book and jazz standards at cafes, weddings, conferences, restaurants, fund raising events, and other venues in the Boston area. Marc is largely a self-taught musician. He also studied at Berklee College of Music. His musical influences range from Chet Baker, Errol Garner, Dina Washington and other jazz greats to The Beatles, Motown, and other singer songwriters such as Carole King and James Taylor.

He has written, produced, and recorded 7 albums of original music, which can be heard and purchased here, and through many on-line venues including  ITunes, and Amazon. In collaboration with producer Mike Galvin, his newest CD, “One More Time” is a complication of both original and jazz tunes.

Marc’s interests and passions include astronomy, photography, and astrophotography; especially witnessing and photographing the rare spectacle of total solar eclipses. This passion has led Marc to travel to various far flung places to witness and photograph this unique and amazing phenomenon. He photographs other astronomical phenomenon as well, including the moon and sun, lunar eclipses, comets and more.

His portfolio of astronomical subjects has been exhibited repeatedly at local art galleries. His works have also been exhibited at other galleries in the Boston area and on Cape Cod. He has lectured at local galleries and at other educational venues on his experiences and travels to see and photograph total solar eclipses. He is a member of the Swampscott Art Association.

Marc studied at Boston University as an undergraduate. He holds a B.A in Sociology from Whitman College in Walla Walla, Washington. He graduated from the University of Massachusetts with an M.Ed in Counseling. He is a Licensed Mental Health Counselor and works currently for a private agency north of Boston. Marc also attended Berklee College of Music in Boston. He spent 35 years of his career as a Social Worker for the Commonwealth of Massachusetts, Department of Developmental Services. Marc is married and lives in eastern Massachusetts.

Other interests include: Fitness and Nutrition, Exercise, Fish Keeping, Physics, and the Comedy and Satire that IS our culture.

“You can’t always get what you want, but if you try sometimes, you just might find, you get what you need”. (The Rolling Stones)

“A little song, a little dance, a little seltzer down your pants!”  (Chuckles The Clown 😀 )

“You may say I’m a dreamer, but I’m not the only one. I hope someday you’ll join us. And the world will live as one.”  (John Lennon)

“All we have to decide is what to do with the time that is given to us”  (J.R.R. Tolkien)

“The most beautiful things in the world cannot be seen or touched, they are felt with the heart. All grown-ups were once children, but only few of them remember it. And now here is my secret, a very simple secret: It is only with the heart that one can see rightly; what is essential is invisible to the eye.”  (Antoine de Saint-Exupery )